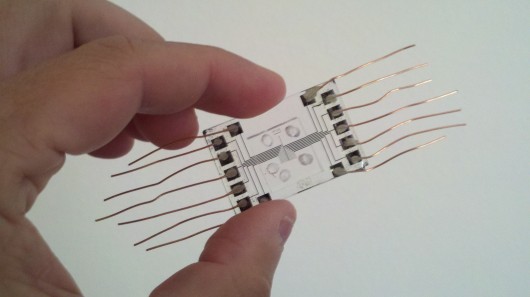 Although various alternative technologies are being developed, the large-scale desalination of seawater typically involves forcing it through a membrane that allows the water to pass through, but that traps the salt. These membranes can be costly, they can get fouled, and powerful pumps are required to push the water through. Now, however, scientists from the University of Texas at Austin and Germany’s University of Marburg are taking another approach. They’ve developed a chip that separates salt from water.

The prototype plastic “water chip” contains a microchannel that branches in two, and utilizes a process known as electrochemically mediated seawater desalination.

That process begins with seawater being run into the microchannel, and a 3-volt electrical current being applied. This causes an electrode embedded at the branching point of the channel to neutralize some of the chloride ions in the water, which in turn increases the electrical field at that point in the channel. That area of increased current, called an ion depletion zone, diverts the salt to one branch in the channel while allowing the water to continue down another.

In its present form, the system can run on so little energy that a store-bought battery is all that’s required as a power source. Two challenges still need to be overcome, however.

First of all, the chip currently only removes 25 percent of the salt from the water – 99 percent must be removed in order for seawater to be considered drinkable. Secondly, the system must be scaled up in order to be practical. It presently produces about 40 nanoliters of desalted water per minute. That said, the scientists are confident that with further research, they can rectify both issues. The system is being developed through spin-off company Okeanos Technologies.