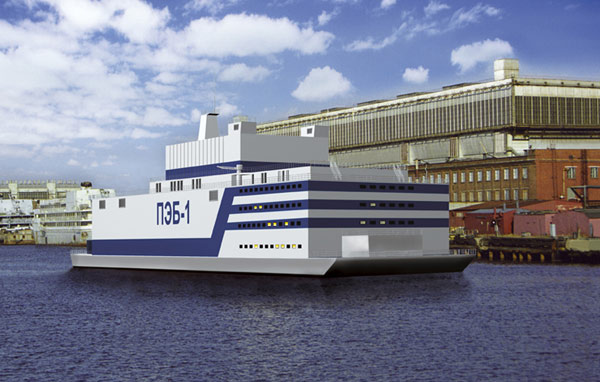 Russia plant to bring online a floating nuclear power plant in just three years. The nuclear power station will provide energy, heat and drinking water to relatively inaccessible areas of Russia. The ship called Akademik Lomonosov  is planned to be the first of a small fleet of floating power stations. As well as powering cities with up to 200,000 people, the plant can also provide 240,000 cubic metres of fresh water every day.

The director of Russia’s largest shipbuilders, the Baltic Plant, announced that the unique ship should be operational by 2016 at the 6th International Naval Show in St Petersburg. The first ship is intended to be the first of small fleet of floating nuclear plants in Russia. It is designed to provide energy to big industrial companies, cut-off port cities and offshore oil and gas platforms.

The ship’s power-generating capabilities were based on nuclear reactors which are already on-board ice breaker ships in the chilly region that have operated successfully for over half a century. The Akademik Lomonosov will weigh 21,500 tons and have a crew of 69 people. But it will not have a propulsion system so will have to be towed to the location where it is needed.

It will have two modified KLT-40 reactors that will be able to provide enough energy for a city with 200,000 people. Together the reactors will generate 70MW of electricity or 300 MW of heat. Russia’s large towns and ports along its northern coastline and its far eastern regions are currently not experiencing much economic growth, partly because of a lack of energy, so it is hoped that these floating power stations will help the situation.

The country could also use them near areas of mineral deposits and military bases outside the country. The floating power plants will be able to be modified and be used as a desalination plant. This means that the ship could produce a staggering 240,000 cubic metres of fresh water every day.

Just like nuclear power stations on land, the floating power plant is designed with a safety margin. It is designed to withstand collisions with other ships and land as well as survive a tsunami. After 40 years of service, the nuclear reactor will be replaced.

The firm claims that its floating power station is safe for the environment as it does not release any hazardous substances while it is operating. Building of the first ship got underway in 2007 at that Sevmash Submarine-Building Plant in Severodvinsk. It was moved to the Baltic Plant where it stayed for two years after the money ran out. But work on the vessel has got underway again after a financing deal was signed between the Baltic Plant and a company owned by the Russian State in December of last year.