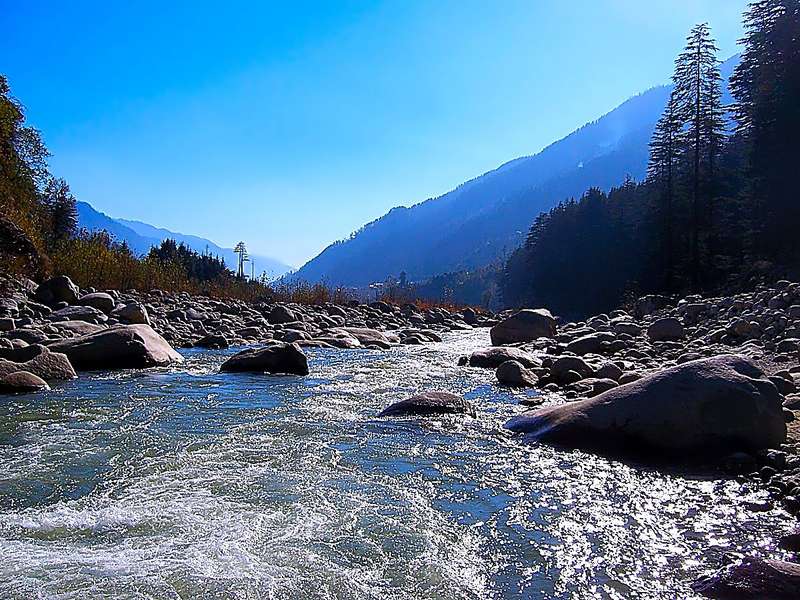 Himdhara, an environmental research and action group, released a report on Saturday questioning feasibility of the proposed 66MW Dhaulasidh hydroelectric project to be constructed on the Beas river. Titled “Big Costs, Little Gain”, the report critiques the project on the ground that the environmental, socio-economic and financial costs of the project far outweigh the benefits and that this project needs to be reviewed before further implementation.

Addressing mediapersons on Saturday, members of Himadhara said that Dhaulasidh hydropower project is one of the three new projects proposed on the Beas and is now posing a serious threat to the last stretch of free-flowing Beas, which is already substantially depleted.

These projects, located between Pandoh Dam in Mandi district and Pong dam situated at the boundary of Kangra district with Punjab, are the 141MW Thana-Palaun, 78MW Triveni-Mahadev and 66MW Dhaulasidh project. Of the three, the Dhaulasidh project is in advanced stage with most of the clearances granted and the land acquisition proceedings being close to completion, they said.

The report stresses that the project which involves the construction of a dam of 70.75m height from the riverbed is going to submerge more than 330 hectares of land out of which 252 hectare is agricultural land. “For a run of the river project and that too of only 66 MW capacity, even 330 hectare of land is quiet high, especially if we compare it with other projects. The Dhaulasidh project will require 8 to 250 times more land on a per megawatt basis to generate electricity”, said Prakash Bhandari member of Himdhara.

He said that extent of adverse impact on livelihood of local community of more than 700 families is quite huge in comparison to the 40 jobs created during operational phase of the project. “In the affected villages, we interviewed several people and found that most land losers were not really aware of the details of the project. In fact, most villagers said that were expecting very high rates of compensation. At some places, this was expected to be at market price, and at others even three times the market price”, said the report.

It also needs to be seen how the government plans to handle the matter, considering that the rates would be decided as per the “Right to Fair Compensation and Transparency in Land Acquisition and Rehabilitation & Resettlement Act, 2013” – which would increase the project cost considerably. And, the project is likely to face opposition if the expected rates are not given.

The report also raises the point of falling revenues from the same of electricity. According to the report, “Considering that the rate at which the state is able to sell each unit of electricity generated are drastically falling and have reached Rs.2/or Rs.3/- per unit in 2013, the benefit accruing to the government is likely to be incommensurate compared to the cost.”

Highlighting environmental impacts of the project, the report states, “The Beas river is already overloaded with number of dam projects without any assessment to understand the cumulative impacts of these on river health and ecology at the basin level.”

Himdhara is going to submit a petition to the central electricity authority and the state government along with a copy of the report demanding that the techno-economic clearance granted to the project be reviewed. “We have written several times to the ministry of environment asking for basin-wise carrying capacity and impact studies to be done but the matter has not been addressed”, added members of the group.