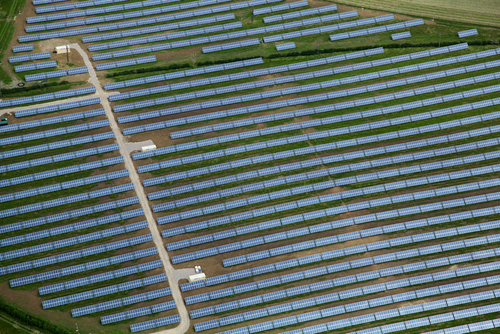 A strong showing from global solar photovoltaic (PV) installations, coupled with a sharp fall in new wind energy capacity, has led to solar power growth outpacing wind this year — for the first time ever.

Both wind and solar PV broke records last year, with onshore and offshore wind adding 46.6 GW and solar PV adding 30.5 GW. But 2013’s slowdown in the two largest wind markets, China and the U.S., is opening the way for the rapidly growing PV market to overtake wind, BNEF said.

Justin Wu, BNEF’s head of wind analysis, said, “We forecast that wind installations will shrink by nearly 25 percent in 2013, to their lowest level since 2008, reflecting slowdowns in the U.S. and China caused by policy uncertainty.”

In the U.S., the repeated last-minute extension of the production tax credit has created what analysts have called a perpetual boom-and-bust cycle. This year’s uncertainty led to a drop in investment, causing significant layoffs and facility closures across the wind supply chain.

In China, where the industry has suffered from curtailment due to insufficient infrastructure and tightened standards for wind turbines have slowed development, the sector has been expecting further policy announcements after the government raised this year’s new-capacity target to 18 GW in January.

In particular, developers say China’s feed-in tariff (FiT) for offshore wind is too low given the higher costs of offshore development, leading to predictions that the nation will fail to meet its offshore goal of 5 GW by 2015. The government has said it will re-think the FiT, but has offered no timetable.

Globally, demand for wind turbines is predicted to shrink by 5 percent this year, for the first time since 2004.

In Japan, the fourth country to reach the 10 GW mark in cumulative solar capacity, the attractive FiT has led to rapid growth over the past year, with demand surging in the commercial and utility segments. China, which will be the largest solar market this year according to BNEF, has raised its renewable energy surcharge and revamped its subsidy regime, expanding performance-based incentives for distributed solar power in a bid to grow the domestic market after solar trade spats with Europe and the U.S.  The nation aims to more than quadruple its solar power generating capacity to 35 GW by 2015.

Growth in Asia will offset PV’s decline in traditional leading regions. “Europe is a declining market,” Chase said, “because many countries there are rapidly moving away from incentives, but it will continue to see new PV capacity added.”

While the immediate future looks brighter for solar than wind, BNEF predicted that, despite 2013’s rankings upset, the maturing onshore wind and solar PV sectors will contribute almost equally to the world’s new electricity capacity additions between now and 2030. On- and offshore wind will grow from 5 percent of total installed power generation capacity in 2012 to 17 percent in 2030, while solar PV will increase from a lower base of 2 percent in 2012 to 16 percent by 2030, BNEF said.

The analysis also predicted that technology suppliers in both wind and solar may see a move back to profit as soon as this year, after a prolonged period of oversupply and consolidation.

Michael Liebreich, BNEF’s chief executive, commented: “Cost cuts and a refocusing on profitable markets and business segments have bolstered the financial performance of wind turbine makers and the surviving solar manufacturers. Stock market investors have been noticing this change, and clean energy shares have rebounded by 66 percent since their lows of July 2012.”