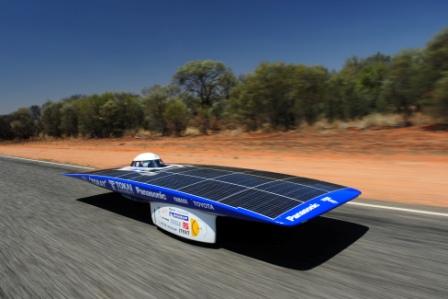 Panasonic Corporation today announced that it has agreed to provide technical support to Tokai University’s solar car team, which will compete in the 2013 World Solar Challenge (WSC 2013), one of the world’s biggest races for solar cars, to be held from October 6 to 13 in Australia. Under the sponsorship agreement, Panasonic will provide the Japanese university team with its HIT(R)(1) solar cells which boast the industry’s top-class electricity output(2) as well as its high-capacity lithium-ion batteries.

The WSC, which started in 1987 and became a biennial event in 1999, is a time-based competition over a distance of 3,021km from Darwin in the north down to Adelaide in the south. Teams from around the world, including universities and corporations, participate in the race in cars powered solely by sunlight.

The Tokai University team has an impressive track record in solar car racing. The team won the previous WSC races held in 2009 and 2011, and is now looking to make a hat trick in the WSC this year. Last year, the team also won the race in South Africa that was recognized by the Federation Internationale de l’Automobile (FIA) as the world’s longest alternative fuel vehicle car race. Panasonic’s energy products contributed to the team’s victories at these international competitions.

Panasonic’s HIT solar cells have a unique hybrid configuration with a crystalline silicon substrate surrounded by ultrathin amorphous silicon layers. Compared to ordinary crystalline silicon-based solar cells, Panasonic’s HIT solar cells suffer less degradation of power output at high temperatures, delivering the industry’s highest-level energy output per unit of area(2). This makes Panasonic’s HIT solar cells ideal for solar cars competing in races such as the WSC, given that the WSC regulations limit the total area of solar cells installed on the body to up to six square meters(3) and that the cells will be exposed to the scorching Australian sun. The HIT solar modules for the Tokai University team are purpose-built for the solar car race, using the same solar cells – the main component that converts the sunlight into electricity – that are mass-produced for the residential market.

The rechargeable batteries Panasonic is providing are the cylindrical 18650 type (18 mm in diameter x 65 mm in height) high-capacity lithium-ion battery cells which use the company’s proprietary nickel-based positive electrode. The high-capacity and lightweight battery cells store excess power generated by the HIT solar cells so that the car is able to continue running even on overcast days. – See more at: http://www.itnews.it/news/2013/0827111502532/panasonic-supports-tokai-university-solar-car-team-with-high-efficiency-hit-r-solar-cells-and-high-capacity-lithium-ion-batteries.html#sthash.1HXltTDR.dpuf