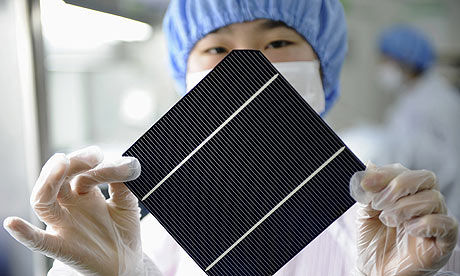 First Solar, based in Tempe, Arizona, will attempt to incorporate GE’s technology into its extensive and well-developed manufacturing process. GE, based in Fairfield, Conn., will purchase and brand First Solar panels for its own installations.

First Solar’s panels made of thin metallic films were once far and away the cheapest way to generate solar electricity. The technology is not as efficient at turning the sun’s rays into electricity as traditional crystalline silicon panels, but it was so comparably cheap to manufacture that the overall cost of solar electricity was lower.

But an oversupply of crystalline silicon manufacturing capacity, a reduction in global renewable energy subsidies, and lower prices for the raw material for traditional panels sent prices for all panels plummeting. This helped make solar much more affordable for customers, but it eroded the price advantage of thin film solar and eviscerated the profits of both First Solar and its crystalline silicon competitors.

First Solar announced Tuesday after the market closed that its net income for the second quarter fell 70 percent, to US$34 million from US$110 million a year ago. Revenue fell by 46 percent to US$520 million. On a per-share basis the company earned 37 cents, down 71 percent from US$1.27 last year.

Analysts polled by FactSet had expected First Solar to earn 56 cents per share, on average. First Solar shares fell US$4.14, or 9 percent, to US$42.61 per share in after-market trading.

General Electric, a leader in wind turbine manufacturing, began to dabble in solar when it acquired part of a small Colorado-based solar panel maker called PrimeStar Solar in 2007. It later bought all of PrimeStar, which focused on the same type of thin film panels that First Solar makes, and announced in 2011 that it would build the nation’s largest solar panel manufacturing plant. GE announced last year it was putting the plant on hold. Earlier this year GE’s panels set a record for thin film efficiency at the National Renewable Energy Laboratory in Golden, Co.

Now First Solar and GE hope that by combining their technology, they can increase the efficiency of the panels, which would have the effect of reducing the cost of electricity produced by them, in hopes of regaining the cost advantage of thin film over crystalline silicon.

First Solar also announced Tuesday that it would acquire a 1.5-gigawatt portfolio of solar farm development projects in the U.S. and Mexico from Element Power, which was owned by the clean energy private equity firm Hudson Clean Energy Partners. Terms were not disclosed.