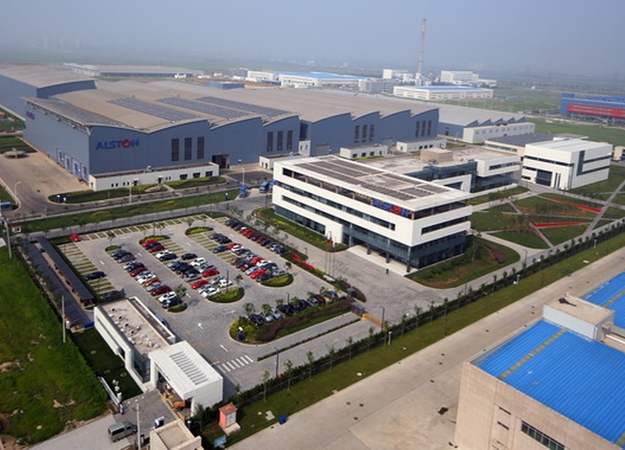 Alstom’s largest hydropower industrial site was inaugurated in Tianjin, China on September 17, 2013 in the presence of Patrick Kron, Chairman and CEO of Alstom, and Jérôme Pécresse, President of Alstom’s Renewable Power Sector. With an investment of €100 million on this new facility, Alstom aims to further tap into China’s increasing hydropower needs and grow its hydropower business throughout the region.

The inauguration of Tianjin’s new site marks the completion of an upgrade programme, without interruption of the production. It includes an upgrade of the existing hydropower industrial facility and the construction of a new production area as well as a global technology centre (GTC). Today, the Tianjin site is equipped with first class facilities and covers an overall area of 250,000 square meters. It houses approximately 2,000 Alstom employees including over 400 engineers.

Alstom supplied recently, from its Tianjin site, four 800 MW class units to China’s Xiangjiaba hydropower plant. The most powerful hydroelectric generating units in the world were delivered in a record time for such large machines – at an average of one unit every two months. Alstom is the only manufacturer who delivered such powerful units already in commercial operation. Thanks to the completion of the Phase II project, the new site has 19 critical heavy machines including two new and state-of-the-art gantries. It will be able to deliver on an annual basis up to 26 turbine and generator units.

The new global technology centre will address the research and development needs of the Asian market for all types of hydropower equipment. Its major activities include R&D in mechanics, hydraulics and electrical disciplines for hydropower turbines and generators as well as scale model tests of Francis and Kaplan turbines. The new GTC in Tianjin is part of Alstom’s global R&D network and closely linked with its European teams notably in Grenoble (France).

The new workshop can achieve a yearly CO2 emission reduction of over 10,000 tonnes1, thanks to numerous architectural innovations such as ground-source heat pumps, double insulation, heat recovery systems, rainwater recycling, natural light and solar photovoltaic panels that provide electricity for heating, cooling, lighting and ventilation for the entire factory.

“As a global leader in power generation, Alstom has used its advanced and reliable technological expertise to equip many important power projects in China. The inauguration of the Tianjin site represents a key milestone for Alstom’s development in the country. This world class factory will allow us to accelerate Alstom’s contribution to China’s sustainable development,” said Patrick Kron, Chairman and CEO of Alstom.

China represents the world’s largest generator of hydroelectricity. According to the country’s 12th Five Year Programme of Energy Development, China will further promote hydropower and by 2015 the total capacity of conventional hydropower and pumped storage power station will reach 260GW and 30GW respectively. China plans to install 30GW of conventional and 10GW of pump storage hydro plants by 2015. Present in hydro activities in China for 18 years, Alstom has accumulated a 20% market share of the total Chinese installed capacity of large hydropower equipment.

On top of the booming Chinese market, there is also huge potential throughout Asia. Asia was the world’s top source of hydroelectricity in 2009, producing more than 26% of the world’s total hydropower. By 2035, these countries are expected to account for 85% of additional global capacity. For instance, there are 10 GW of potential hydropower projects in Laos and more than 30 GW in Myanmar.

“The new site illustrates Alstom’s commitment to bring our technology strengths and innovations to local customers. Tianjin site now offers a hydropower full value chain with a complete array of activities. It will play a pivotal role in the future growth of Alstom in China and the Southeast Asia market” said Jérôme Pécresse, President of Alstom’s Renewable Power.

Alstom is the world leading hydropower equipment supplier and service provider. With over a century of experience and extensive know-how in the hydropower industry, Alstom hydropower turbines and generators installed worldwide represent more than 25% of the total hydropower capacity.