!-- Hotjar Tracking Code for www.pimagazine-asia.com -->
You Are Here: Home » Whitepapers » The Tori Power Plant from Essar

The Tori Power Plant from Essar 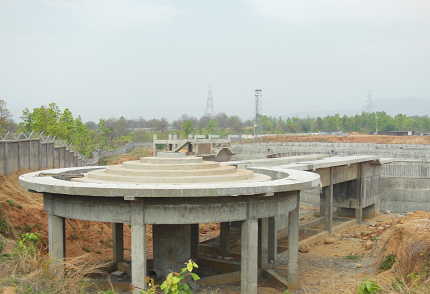 Essar Energy are one of an ambitious number of private power developers providing a massive boost to the Indian power capacity. They are developing a vast amount of projects across India with sites at Hazira, Paradip, Salaya, Navabharat and Tori. This article takes a look at the impressive Tori power station, home to one of India’s biggest ACC systems, a technology that is forecast to see great impetus over the coming years, with water shortage issues becoming increasingly evident throughout the country.

The Indian power market is undergoing capacity increase like no other in world. From Karnataka to Bihar, new sites are being investigated on a daily basis. Traditionally, power generation in India has been dominated by state owned players. However, deregulation and a desperate need to meet capacity addition targets has led to the emergence of new, hungry, world class private power producers that are making a huge impact and contribution to developing the Indian power sector.

One of those players is integrated energy major Essar Energy, who are better positioned than most to capitalize on India’s rapidly growing electricity demand. The company is already behind six operational power plants throughout India, and have access to approximately 500 mt of coal resources across seven coal blocks in India and overseas. Essar also have access to 15 blocks and fields in the various stages of exploration and production of oil and gas in India, Indonesia, Madagascar, Nigeria, as well as a pipeline of new power plants that dwarfs many others operating in the same field.

The Gem of Essar: Tori

Essar Power, the subsidiary responsible for the power business arm, aim to expand their current generation capacity of 3,910 MW to 6,701 MW by April 2014. The seven new units presently under construction at Hazira, Paradip, Salaya, Navabharat and Tori signify their intent, as this innovative and focused player seeks to overcome the industry common challenges associated with domestic coal blocks, imported coal restrictions and interim fuel arrangements.

This article will take a close look at one of the key plants being developed as part of Essar Power’s expansion, the Tori project. This special power plant is one of Essar’s biggest and most ambitious projects to date, and is being developed in two phases, Tori I &Tori II, as three units of 600 MW. The development is located in Eastern India’s state of Jharkhand in the Latehar district and is expected to be completed by the end of December 2014. The project is being implemented through wholly owned subsidiary Essar Power Jharkhand.

The development has been unique in its approach to environmental consideration, and with the requirement of almost 300 hectares of land, this has been no easy task. Originally on completion, Essar had expected the total project cost to reach approximately Rs. 57 billion, but in order to eliminate certain challenges associated with water use, Essar decided to undertake one of the most ambitious air cooled condensing systems that the power industry in India, and the world, has ever seen.

This will impact the capital project costs, but will result in dramatically reduced operating costs as Essar will need to purchase significantly lower amounts ofwater than previously expected. The cooling system is being sourced from quality Chinese system supplier Harbin Air Conditioning, who have amassed much experienced on the global stage for a range of differing cooling systems and requirements. The Tori project did have approvals to draw processing and cooling water from the Amanat and Damodar Rivers. However, It was decided that to mitigate risk concerned with water availability, undertaking such an innovation with direct air cooling on this scale would ultimately be a long term benefit. Economical impact of the system adoption is still under evaluation.

Essar had received approval for the use of 2,461 m3/hr from the Amanat river and 5,593 m3/hr from Damodar River as per a consent from February 2008 for boiler feed water and other critical site needs. The Amanat river approval was sufficient to meet the water needs of the first unit of 600MW, whereas the water allotment Damodar River portion would be responsible for the remaining capacity.

It has been well over 5 years since the Government of India allocated the Chakla and Ashok Karkata coal blocks to Essar Power for the Tori I and II projects, and despite all aspects of construction moving quickly,this vital component of the initiative continues to slow the development down.

The Chakla coal block is an open cast coal mine located in the Latehar district just 4km from the Tori project site. Production had been expected in the first quarter of 2012 but this has been subject to many delays. At present the mining report has been prepared & approved for 4.5 MTPA, with a plan to enhance the capacity to 5.5- 6 MTPA. The environmental clearance is with the Expert Appraisal Committee and formal approval is expected soon, the forestry clearance application has also been submitted, but the proposal is at state level and action is being taken to comply with the Forest Right Act.

The mining lease at Chakla has also been applied for, but production start is not expected for 9 – 12 months after the lease has been approved, subject to environment and forest clearance. The Ashok Karkata coal block will also be an open cast coal mine, but is located approximately 20km away from the project site. This mine is still at the geological stage and the mining plan will only be prepared after detailed exploration. Whilst the forest clearance area has been demarked, the forest diversion application will only be made after preparation of mine plan & land acquisition for infrastructure. This in turn has a knock-on effect on the mining lease and subsequent production schedule. Essar Energy are currently progressing forest clearance and environmental consents required from the Indian Government so that mining operations can begin at these two sites as soon as possible.

These delays in securing approvals will unfortunately require alternative sources of coal to be obtained in the early years of operation. As required, e-auction and imported coal will be purchased to provide fuel for this project and an application has also been made for coal under the tapering coal linkage system.

After review and careful consideration it was decided that the plant should be developed in two phases as Tori I and Tori II. At the early stages of development environmental approval was achieved for the first phase on the basis of a 2000MW power plant, this first phase eventually became a 1200MW installation, so it was always a vision to modify capacity to reach full potential. This led to the application of the necessary authorization and emergence of the simultaneous development of Tori II, a single unit of 600 MW. The Essar Power Tori II ‘Expansion’ acquired land during the second quarter of 2010, with the company expecting the total cost of this phase to reach a cool Rs. 23.30 billion. Fuel supply arrangements were relatively straightforward through the dedicated coal mines already allocated at Chakla and Ashok Karkata.

The Essar group’s competence in large scale, heavy engineering projects has been applied effectively to ensure high standards in procurement and construction throughout this development. For the engineering, procurement and construction of this project, Essar Power had entered into an offshore supply contract with Global Supplies, an Essar affiliated company, and also selected Essar Projects India Ltd (EPIL) for onshore supply and construction of the 3 x 600 MW units at Tori I & II, whilst equipment transportation contracts were signed with Essar Logistics. From a recent site visit and evaluation it was revealed that the 1,200 MW Tori I plant is 43.21% complete, whilst the 600 MW Tori II is approximately 16.17% complete. Despite unavoidable challenges on the environmental front, construction of the plant itself is progressing very well. The boilers and auxiliries, supplied from China’s reputable Harbin Boiler Company, are being erected, with much of the structural work already in place for Boiler 1. The air cooling condensing system is also moving unhindered, with the system for Unit 1 seeing the raft work completed and concreting for the columns in progress.

involved in the supply for balance of plant equipment in the Tori plant, and will also be providing the generator transformers and the gas insulated switchyard. The emergency diesel generator set will be supplied by CAT dealer GMMCO, with the plants distributed control system coming from ABB. The fuel oil handling system will be taken care of by Thermosystems, and McNally Bharat joins the prestigious group, continuing their success with Essar by supplying the ash handling system.

With equipment being sourced and supplied from competent and quality vendors from across the globe, once operational the Tori plant will be one of the most environmental friendly that India has seen.

Pursuant to a memorandum of understanding between Essar Power and the Government of Jharkhand, the state of Jharkhand is entitled to purchase 12% of the power delivered by this plant at a variable rate, and has a right of first refusal to purchase up to 25% of the power at a rate to be determined by the appropriate regulatory commission. The remaining power generated by this plant will be sold pursuant to merchant sales.

For the 600MW coal-fired Tori II power station, Essar signed a power purchase agreement (PPA) with Noida Power Company Ltd for 240 MW of contracted capacity. This PPA, like those with BSEB from Tori I, also has a 25 year duration. The PPA was secured following a competitive bidding process, with supply of power under the terms of the PPA being due to commence from April 2014.

Under the terms of the PPA, Essar Energy will supply power at a delivered levelised tariff, including transmission costs, of Rs.4.08 per kilowatt hour (approximately 7.6 US cents per kWh), which is the highest long term tariff achieved through competitive bidding in India to date. The levelised tariff net of transmission costs is Rs. 3.27 per kWh (approximately 6.2 US cents per kWh).The agreement is the first PPA that has been signed for the Tori II project.

Whilst construction moves smoothly, a summary of the final hurdles are displayed below:

Forest Clearance for coal mines: Abolition of the “Go / No Go” has resulted in resumption of the normal approval process for coal mines including Chakla and Ashok Karkata. The Chaklaforest clearance proposal is at state level and action is being taken to comply to the Forest Right Act. Ashok Karkata approvals are still at a preliminary stage.

Tapering coal Linkage: The tapering coal linkage was applied for in 2010. Application had to be resubmitted last year in Feb 2012. Projects are expected to be allocated linkage close to their commissioning.

Road logistics and rail siding: There is a proposal to develop rail siding at Mahuamilan to get coal from alternate sources, this is being seriously explored and an application has been submitted to authorities to strengthen existing village road. The environmental challenges associated with fuel supply are a hurdle that all power developers must contend with in the current climate for the Indian power market. With no problems on the equipment front, power purchase off-take and financing, it is only this matter that holds up the determination of Essar. In spite of the coal conundrum, Essar are being admirably proactive in arranging alternative provisions to combat the domestic situation and have absolute confidence in project completion imminently, with the first units coming online in approximately a year’s time.