Being in the business desk required me to pay closer attention to the much hyped-up three-day-long Asia’s “first and largest” virtual investor forum hosted by the Ceylon Chamber of Commerce (CCC), the Board of Investment (BOI), and the Colombo Stock Exchange (CSE). Inaugurating the forum, President Gotabaya Rajapaksa noted that as Sri Lanka seeks to expand its industrial base, one of the “most significant” requirements would be increased power generation. He went on to add that his Government is committed to make sure that renewable energy sources contribute 70% of our national power requirements by 2030. 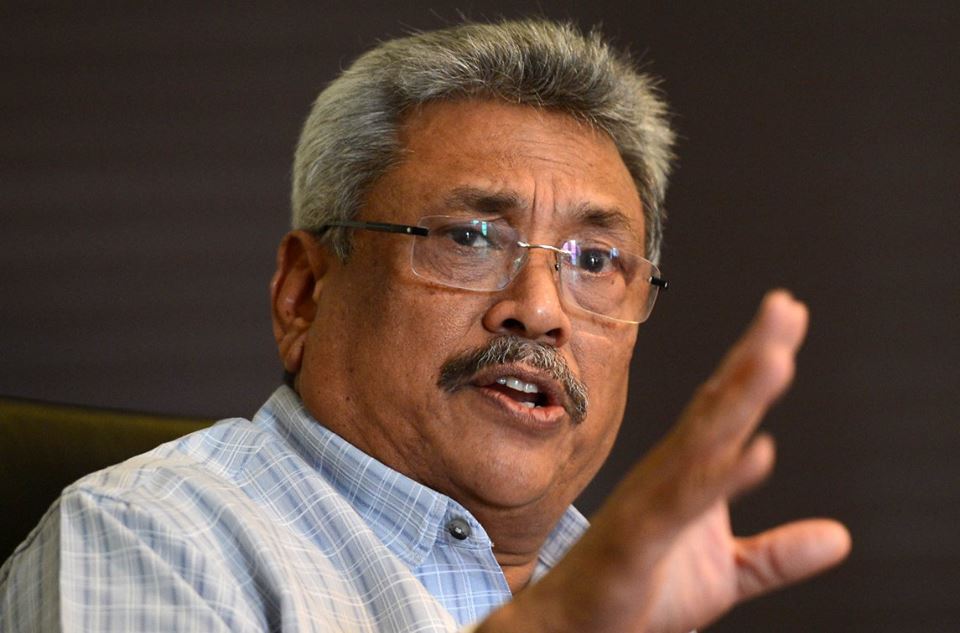 Subsequently he added that this commitment creates opportunities for large-scale power projects that can “sustainably augment” our power supply and set the platform for further industrialisation and economic growth. Therefore, Rajapaksa invited investments into solar power projects with energy storage solutions that can support the stability of the national grid, as well as wind power projects. It was a light bulb moment as I immediately fixed this week’s Market Mine column content as every government talks about solar power projects, announces concessions and incentives in budgets, and discloses plans to increase solar power contribution to the national grid, but there still has not been any notable development in this sector. 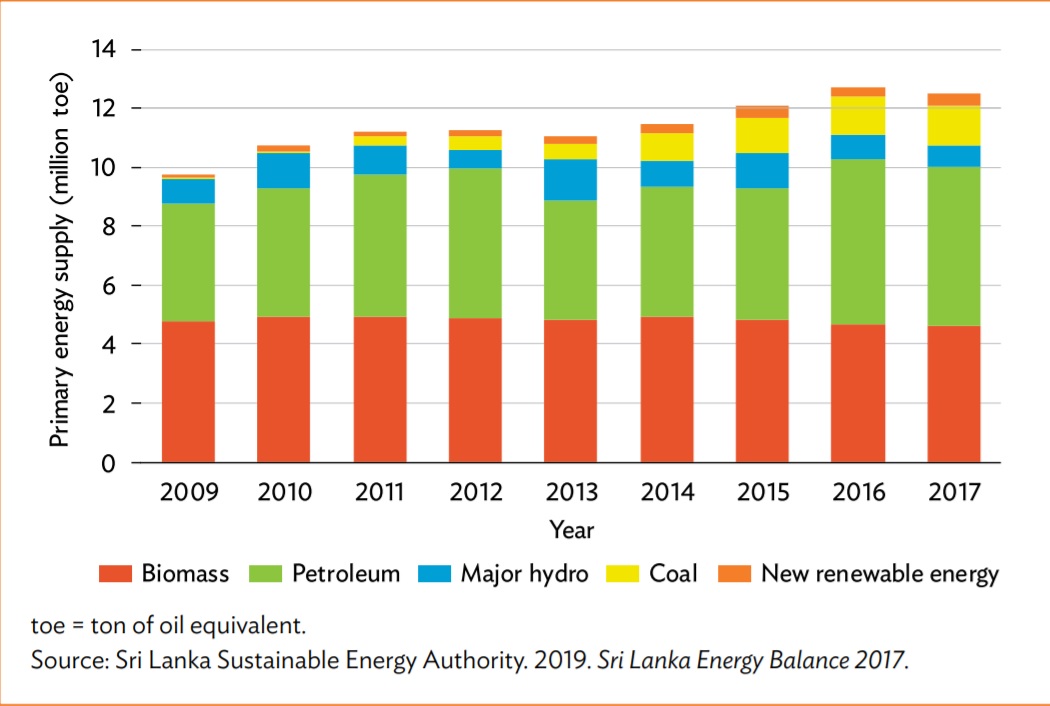 With the increase in the urbanisation rate, access to electricity is also increasing gradually as modern conveniences are mostly electrically powered. In terms of Sri Lanka, the country’s per capita energy consumption is 515.51 kg oil equivalent or 636.3 kWh, one of the highest in comparison to many regional peers.  According to a report compiled by the Asian Development Bank (ADB) on Sri Lanka’s energy sector, the country used about 12.8 million tonnes of oil equivalent energy in 2017 which is reportedly high among countries that have similar per capita economic output.

Yet, it is unfortunate that even to date, Sri Lanka is highly dependent on fossil fuels to meet its national power requirement. The same report of ADB notes that imported crude oil (petroleum) catered to the highest share of national demand in the same year, which was 43%, followed by biomass (37%), coal (11%), hydro (6%), and renewable energy for a mere 3%.

In case you do not know what renewable energy is and what it encompasses, it is energy collected from renewable energy sources such as wind, tides, sunlight, geothermal heat, and rain. This type of energy produces no greenhouse gas emissions and reduces air pollution, while also decreasing dependence on fossil fuels, which in Sri Lanka’s case have to be imported. 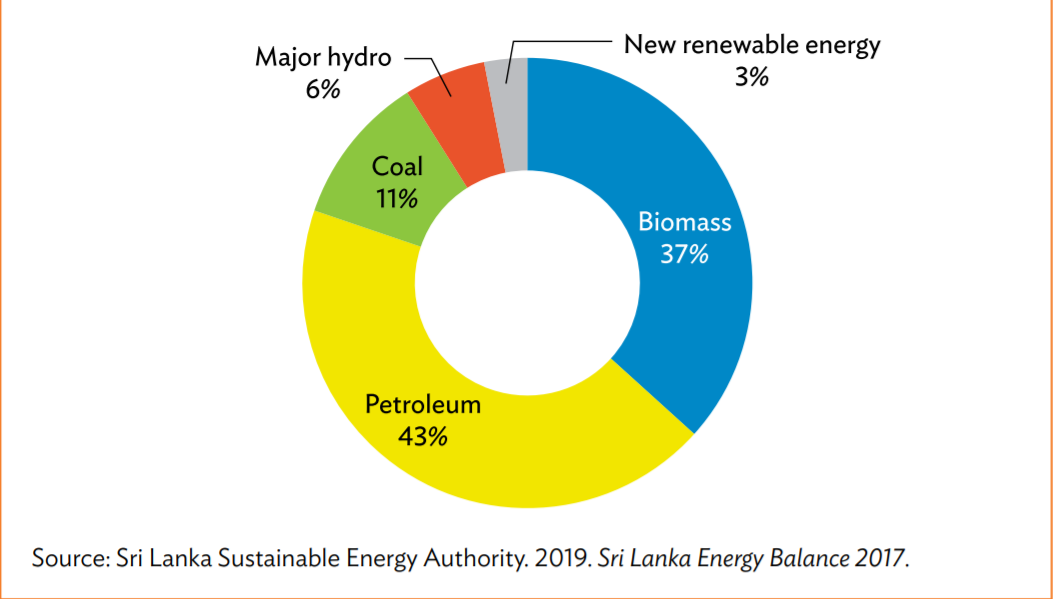 Now one may or may not question here as to why the contribution of renewable energy to our national grid is so minimal even though most parts of the country are pretty much drenched with sunlight almost throughout the year excluding a few days of monsoon. Policy decisions of consecutive governments and implementation of these decisions play a major part in this regardless of the northern, eastern, and southern regions of the country having excess potential of high solar energy. This very same column late last year highlighted that delays in policy enactments and technical constraints hindered early deployment of photovoltaic (PV) cells in the country that convert sunlight directly into electricity.

The first commercial solar power plants were commissioned in 2016, merely five years ago, according to the Ceylon Electricity Board (CEB). It was commissioned in Hambantota utilising assistance from Japan and Korea. As part of the Sooryabala Sangramaya national programme, the CEB was seeking proposals to commission 20 more solar power projects in the country, ranging from 3 MW to 10 MW, bringing the total contribution of these projects to around 150 MW. 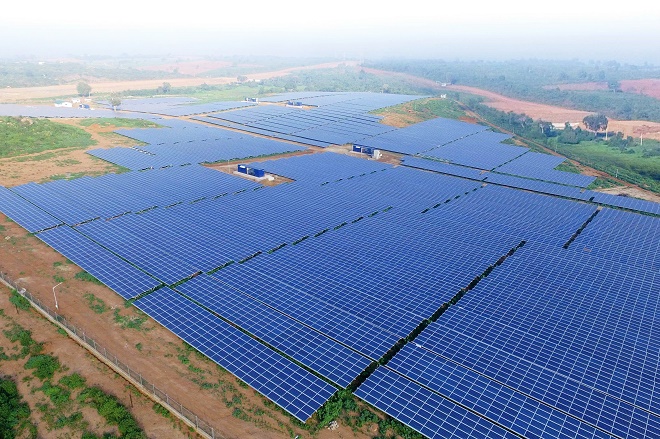 The CEB is even of the view that solar power alone is sufficient to cater to the national energy demand during the day time. We as a country still rely largely on fossil fuel-based energy sources which weigh down a country’s import expenditure as we have to import them. In addition to forming a big dent on expenditure, they also emit greenhouse gas and cause air pollution. The large gap between fossil fuel and solar-based energy is often attributed to higher capital costs involved in solar projects, which explains why there is very little contribution from the private sector towards renewable energy.

Solar projects in Sri Lanka reach as much as 10 MW of energy production while projects with similar capital cost successfully leverage somewhere between 50-100 MW. In addition to this, the reluctance of leading equipment suppliers to bid for small-scale projects and poor engineering infrastructure in terms of lifting and ship equipment compel the hiring of equipment from overseas at a significant cost which itself is sufficient to discourage potential projects into this sector. Further, it is learnt that developers are forced to absorb the cost of the dedicated power transmission line.

According to the earlier mentioned report of ADB, Sri Lanka lacks domestic capability to fund large-scale energy projects from commercial banks, be it solar or wind, and this forces the country to rely merely on multilateral support or low-cost financing from foreign banks or in today’s context foreign direct investments (FDIs). Further, non-availability of incentives is viewed as a major concern as people are more inclined to invest in other incentive-generating projects.

The assessment further notes that the “high cost involved in solar power project commissioning results in units of solar power being pricier than power produced from fossil fuel sources and due to this, Sri Lanka has historically looked towards the least expensive option to generate power”, which may be due to lack of funds, as usual.

Institute of Physics Fellow Dr. Janaka Ratnasiri, who has a PhD in Electrical Engineering, in a write-up to The Sunday Morning Business highlighted the CEB’s disinterest in utilising funding that is available for solar development from foreign sources.

“Under the Paris Agreement, funding is available for developing countries to build renewable energy projects that will save carbon emissions. However, it is necessary for the host institutions to prepare a suitable project proposal and submit it to the Secretariat of the UN Framework Convention on Climate Change (UNFCCC) through the Ministry of Environment, which is the national focal point of UNFCCC to seek the funding,” Ratnasiri noted. Yet the writer’s understanding is that neither the CEB nor the Sri Lanka Sustainable Energy Authority (SLSEA) has taken the trouble to prepare a proposal to seek funding for this purpose.

Providing a glimmer of hope in the solar energy sector, the current Government seems somewhat focused on improving the country’s renewable energy sector, thereby increasing its contribution to national energy demand. The maiden Budget of the present Government proposed adding 1,000 MW through local investments within the period 2021-2023. With just half a year passed, amidst pandemic, it is quite difficult to assess at the moment whether the Government made any progress with regard to this proposal. However, the Government claims that until now 300 MW of solar energy has been added to the national grid.

The proposal further noted to ‘’add a capacity of 500 MW to the grid, by providing solar panels generating 5 kW to 100,000 houses of low-income families, through loan schemes from the ADB and the Indian line of credit (LoC), to supplement the Government’s investments in the sector”.

“I propose to provide loans at an interest rate of 4% in this regard. This will facilitate the low-income families to save the expenditure on electricity and also earn an extra income by supplying excess energy to the national grid. I propose to invest in the installation of solar panels on rooftops of religious places, public institutions, hospitals, schools, and defence establishments. I propose to facilitate private entrepreneurs at rural level, to install solar power plants connected to 10,000 transformers under the theme “Gamata Balagarayak – Gamata Vyavasakayek. I also propose to provide electricity either through solar energy or rural electricity generation schemes and to ensure the objective of ‘electricity for all’ by the end of 2021. I propose to allocate Rs. 750 million in this regard. I propose to increase renewable energy capacity to 1,000 MW by the expeditious implementation of both offshore wind and floating solar power plants exceeding 100 MW, with incentives provided by the Board of Investment. I propose to allow a tax holiday of seven years for all renewable energy projects.” These were the exact proposals announced by Premier Mahinda Rajapaksa.

With every delay in every project/plan being attributed to the prevailing pandemic, as mentioned earlier, it is somewhat difficult to assess progress on these proposals. But given the local situation “electricity for all by the end of 2021” might be the last thing on one’s mind. However, compared with other developing countries, Sri Lanka may have to do more than this.

It would not be incorrect to say that China is leading the global solar power revolution and about 60% of the solar panels are made in China. In 2017 alone, China invested about $ 86.5 billion into solar projects, but it would be unfair to compare China with Sri Lanka given the vast difference between economic indicators. But in terms of the lessons we could learn, the Chinese Government enacted the Renewable Energy Law in 2005, which facilitates renewable energy generation, and supporting regulations together with guidelines on research and development, manpower training, and public participation. As a result, the market share of PV increased from 1% to 35% in a mere eight-year period.

In addition to inviting investors to come and invest in solar energy projects or even before that, Sri Lanka may have to adopt similar laws or create a separate law on solar energy and train/encourage the public to set up rooftop solar panels while educating them on the importance of renewable energy as only a very few Sri Lankans are concerned about the pollution non-renewable energy sources cause to the environment. Sadly, they do not seem to be concerned or educated well on environmental pollution. This could be backed up by the MV X-Press Pearl which is now partially floating after being engulfed in flames for almost a fortnight, heavily littering Sri Lankan shores with debris of burnt container shipments, plastics, and chemicals allegedly killing sea creatures. Yet, people are more focused on a party at a hotel, saying “it is okay if you consume sea creatures, but how come it is not okay when they are being washed ashore dead”. Coming back to solar power projects, it is imperative that people be educated on this matter.

Sri Lanka should consider reducing or removing tariffs and taxes in setting up solar projects in Sri Lanka, be it household or commercial, at least for the initial few years, to encourage more solar adoption. In India, solar tariffs dropped by over 70%, from Rs. 14.90/kWh in 2010 to Rs. 4.34/kWh by the beginning of 2016. With this steep reduction in tariffs, grid-based solar energy has achieved near parity with conventional sources.

Even though an initiative was launched in 2016 under the former Government, as of 2021, no concrete steps to increase the solar capacity of the national grid was announced. Local policymakers unfortunately do not have a good record in keeping up with the plans/projects they announce. Therefore, adherence to and the full implementation of proposals that were announced in the Budget 2021 itself would record a considerable development in the solar sector of the country.