With half the emissions of coal, a lower price tag and almost none of the particulates, natural gas is easy to love.

It is still the fossil fuel of choice for many countries in Asia. Some, like Brunei and Singapore, are powered almost exclusively by it. Touted as a clean-enough “transition” fuel, natural gas – a mix of methane and other vapours produced from age-old biomass underground – has become a popular choice, and its use has been increasing at the expense of oil and coal.

Siemens Energy senior vice president: gas is a ‘stepping stone’ before adoption of renewables in ASEAN

In the United States, over 100 power plants switched from coal to natural gas between 2011 and 2019. The same trend is expected in Asia in the coming years.

But the case for fossil fuel reliance in the long run is getting harder. Zero-carbon energy sources like solar and wind are becoming increasingly viable as costs drop. The US Energy Information Administration predicts that electricity generated from natural gas will hit a peak around 2030 globally, with current policies. 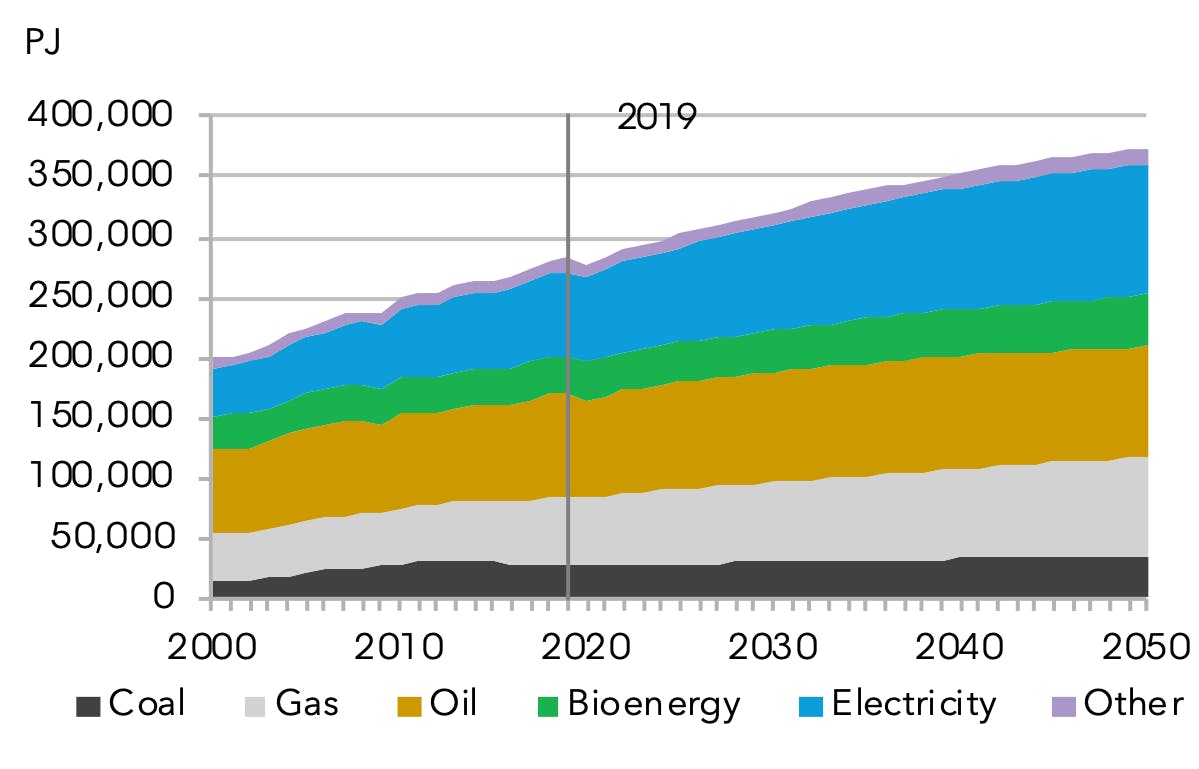 A projection of global electricity mix by 2050, under Bloomberg’s “Economic Transition Scenario”, which does not include climate targets or aspirational national energy policies. Source: New Energy Outlook, 2020, BloombergNEF.

The International Energy Agency (IEA) estimates that natural gas power generation needs to fall by some 90 per cent by 2040, for the world to hit net-zero emissions by mid-century. Much will depend on whether the Asia-Pacific region, already one of the largest natural gas users globally, can wean itself off the fuel in the coming years. As it stands, demand from the region may double by 2050.

Responding to such pressures, major gas turbine manufacturers are making continuous technological advancements to be hydrogen-compatible. The lightest gas on Earth combusts similarly to natural gas, producing waste heat which further rotates generators (much like in traditional combined cycle plants), with one key difference – it does not emit carbon dioxide in the process. This caveat offers a lifeline for existing investments in natural gas plants.

“The ability to substitute natural gas with hydrogen over time means investments in gas power plants today will have remarkable asset resilience for investors,” said Andreas Pistauer, head of generation at Siemens Energy Asia Pacific. Making the case for retaining natural gas plants with a hydrogen swop, he details how “[this] eradicates the need to undertake huge amounts of resources to construct entirely new facilities.”

The ability to substitute natural gas with hydrogen over time means investments in gas power plants today will have remarkable asset resilience for investors.

Siemens Energy has 20 turbine models that can take on hydrogen fuel in its mix, and has been deploying such technology for industrial use since the 1960s. 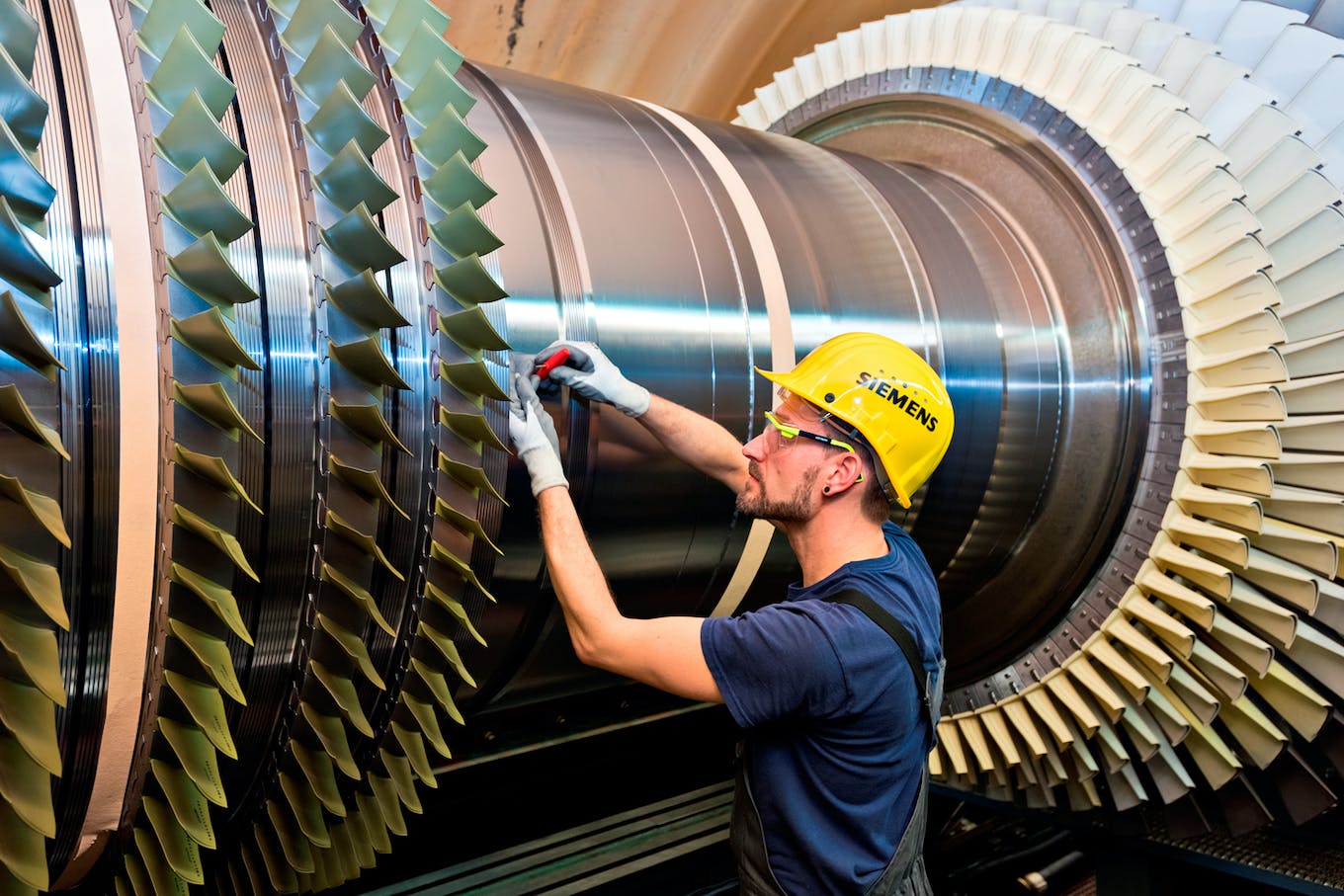 Explaining how this mode of hybridisation supports the shift to low-carbon fuels, Pistauer is optimistic that such turbines will reap carbon savings in the short-to-medium term while also affording time for groundwork and infrastructure to be set in place for the smooth integration of hydrogen facilities in the long run.

Still, development is set to be a slow burn for now. Green hydrogen is currently selling at US$3 to US$7.50 per kilogramme, several times higher than natural gas. Its cost is expected to drop in the coming years with better technology and economies of scale, but fast growth is expected only after 2035.

Burning hydrogen to generate electricity may also raise eyebrows, as electricity is needed to create hydrogen fuel from water in the first place. But Pistauer said there is a use case for hydrogen in providing back-up power for intermittent sources of energy like the wind and sun.

The ability of gas power plants to provide flexible load is key when complementing, or even enabling the rapid growth of renewable, but fluctuating, capacity. While efficient, more importantly this flexibility is critical to enable large renewable capacity in the grid. The gas can also be stored for months, allowing excess solar energy generated in summer to be used in dark winters.

There are also technical challenges. Hydrogen burns 300 degrees Celsius hotter than natural gas, making it harder to control. With such high heat, some turbines may belch nitrogen oxides, a major cause of urban air pollution and acid rain.

In a white paper, Siemens Energy wrote that gas turbines may need to be modified or replaced to handle high hydrogen-fuels safely.  Other parts of the power plant, like pipes and flame detection systems, may also need tweaks to ensure safety. Each upgrade will need to be site-specific and require an in-depth analysis.

For now, companies are focusing on blending small amounts of hydrogen into the natural gas feed of power plants, with trials in the US and Australia. Their ventures feed into wider industry and regulatory interest, to test out the transport of hydrogen in existing natural gas pipelines.

Siemens Energy aims to provide 100 per cent hydrogen turbines by 2030, in line with  the European Association of Gas and Steam Turbine Manufacturers.

In the meantime, natural gas looks set to stay. According to the IEA’s 2050 net-zero scenario, it is unlikely that natural gas will be completely phased out. Demand from Asia-Pacific for natural gas is expected to lead the post-pandemic rebound.

“Baseload generation will remain the province of fossil fuels in most Asian countries in the coming years,” said Pistauer. “Natural gas, where available domestically or imported as LNG, will play a key role in satisfying the growing demand for firm baseload electricity.”

Siemens Energy said it is addressing the problem of emissions from the fossil gas through equipment upgrades and digitalisation. Gas turbines today can convert around 35 per cent of the energy in natural gas to electricity, though advanced kits with over 60 per cent efficiency are in development. Pistauer said Siemens Energy is also using 3D printing to accelerate the development and production of advanced components and devices, such as turbines with higher temperature tolerances.

Technology to capture carbon dioxide from plant exhaust is also in development. Although it is expensive and no gas plants in the world are currently using it, this could change with a recent resurgence of investments into carbon capture technology by governments worldwide.

What’s left is to tackle methane leakage from the production, storage and transport of natural gas. Even though methane only remains in the atmosphere for about a decade, it is over 80 times more potent than carbon dioxide in heating the Earth, and currently contributes to a quarter of current global warming.

While more than 100 countries have singled out methane and pledged to cut emissions by 30 per cent by 2030 in the recent COP26 discussions, several large emitters from Asia such as India, Iran and China did not join in the pledge, though China has said it will study how to reduce methane emissions, including from the natural gas sector.

Over 100 countries singled out methane in recent COP26, and pledged to cut emissions by 30 per cent by 2030.

Among them is the US, presently one of the biggest emitter of methane gas, which wants to cut its emissions by over 50 per cent through stricter rules on equipment upgrades and monitoring of wells. This measure has seen the country removing over 2 per cent of methane-rich natural gas from its supply chain. Similar rules have been tabled in the European Union.

“The energy transition is a global movement that requires close collaboration between governments, the private sector, and the larger society,” said Pistauer, adding that hydrogen-capable gas infrastructure could help in the interim, as countries pave their way towards more sustainable energy futures.