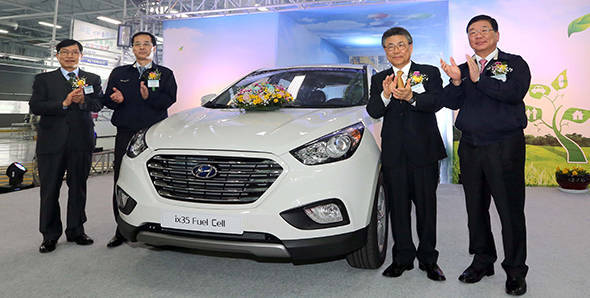 The automotive pioneers with hydrogen fuel cells were Mercedes in Germany and Honda in Japan. This power unit of the future has had so many false starts that we now treat all claims that production is about to begin with scepticism. Recent developments in the evolution of the FCEV (Fuel Cell Electric Vehicle) have included Honda joining forces with General Motors, Toyota linking with BMW, and a three-way cooperation between Mercedes, Ford and Nissan. But the leader in the field could now be Hyundai of Korea, working on its own, and with a fuel cell vehicle already on the production line.

FCEV versions of the iX35/Tuscon are now in series-production. The first batch of 1,000 cars is being rolled out for customers – mostly businesses with an interest in zero-emissions vehicles – and in 2015 Hyundai plans to move to mass-production of at least 10,000 cars a year.

To drive, the iX35 FCEV, which is outwardly indistinguishable from the petrol and diesel versions, requires no compromises by driver or passengers. The fuel cell stack takes the place of the combustion engine and an electric motor alongside drives the front wheels. Like all electric cars, the step-off from rest is brisk but performance tails off further up the scale – 0-100 km/h in a leisurely 14 seconds and a top speed of 160 km/h. It is eerily quiet at all speeds, as unlike most other FCEVs it does not have, or need, an air compressor.

A fuel cell produces electricity by promoting the combination of oxygen from the air and hydrogen fuel and its only waste product is water, so an FCEV is an electric car that is refueled rather than recharged. Refueling is the main issue. Hydrogen is not produced in quantities that its widespread use for transport would require and it needs to be stored at high pressure if a car is to carry enough fuel for an adequate range in reasonably-sized tanks.

The Hyundai, which has a range of 600 km, carries two carbon-reinforced aluminium tanks (104 and 40 litres) concealed under the rear floor which store hydrogen at 700 bar. To achieve quick refueling, the filling station needs to maintain the gas at 900 bar and that is something that has to be resolved as the infrastructure develops; the usual transport pressure in delivery tankers in 200 bar.

The UK, and London in particular, is seen as one of the places that it is most eager to encourage a hydrogen infrastructure, which, with the high cost of the fuel cells themselves, is the main hurdle to the introduction of FCEVs. Hyundai says that it is making good progress in reducing manufacturing costs and it is predicted that the FCEV will have price parity with comparable combustion engine cars within 10 years. A private-public initiative, involving Hyundai and several other car companies, plans to instal an initial 65 hydrogen refueling stations in the UK, rising to 300 by 2025.