Myanmar is expected to announce the winners of tenders for a raft of solar power plants ahead of general elections in November and following a process whose onerous conditions threw obstacles in front of international companies, except, somehow, those from China, from where more than half of the bids came.

After sitting on numerous solar plant proposals for years, the National League for Democracy-led government issued the tenders in mid-May as the November elections loomed. Submission deadline: one month later.

The tenders are for plants at 30 locations with a combined capacity of 1,060 megawatts, equivalent to the output of a typical nuclear reactor. One plant is to have a generating capacity of around 30MW to 50MW.

The lowest bidder for each project will build the plant, then own and operate it for 20 years, selling the output to the state-owned electric company under a power purchase agreement.

A list of bidders reviewed by the Nikkei Asian Review shows 155 bids, with over half coming from Chinese companies. Of the Chinese bidders, three stood out — Sungrow Power Supply, China Machinery Engineering Corporation and Datang International Power. They accounted for around a third of all bids.

The projects could mark a milestone for Myanmar’s renewable energy policy, but the tenders’ tight deadline and other strict conditions triggered a rare backlash from Yangon’s business community.

Many local companies were unable to bid as they could not meet the requirement to show annual income of $20 million for the past three years.

And a decision to forbid electronic bids made it difficult for foreign companies, stymied by pandemic-related constraints, to participate. With restrictions on international flights in place throughout the application period, most foreign investors outside the country were unable to enter Myanmar to conduct due diligence, visit sites and negotiate land deals.

After protests by foreign embassies and business associations, including the chambers of commerce of the U.S., U.K. and EU, the Ministry of Electricity and Energy extended the deadline by another month, to July 17, still widely considered unreasonable by domestic and foreign bidders.

It remains unclear how the Chinese bidders maneuvered around the obstacles.

China considers Myanmar a strategic location for Belt and Road investments in ports, pipelines and other key pieces of infrastructure.

A Yangon-based electricity expert who asked not to be named criticized the projects. “The national grid system is not prepared to receive large amounts of solar power,” the expert said, adding that “the solar projects should be well-coordinated and consistent with the national energy strategy.”

In addition, the hasty scheduling exacerbated “land grab” risks, warned Myanmar Centre for Responsible Business, a nonprofit organization. It required bidders to either race to acquire land or claim they already own sites when they do not, the NPO believes.

Electricity shortages are leading to increasingly numerous blackouts and frustration among the people in a country where around half of the population lacks any access to electricity. The government intends to provide electricity to 100% of households by 2030, a goal that requires a rapid capacity buildup.

In 2019, Yangon was forced to implement a planned power outage for several months, affecting households and many businesses alike. The government sought help from the Hong Kong-based VPower Group to install four emergency gas-fueled power plants. VPower, which is backed by Chinese state-run CITIC, says the plants began operating three months ago. 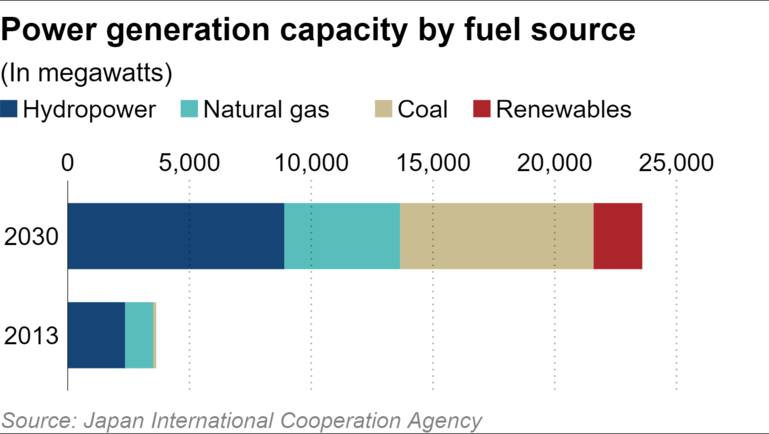 It’s rainy season now in Myanmar, and the dams are currently running at high capacity factors. But this will not be true in the dry winter months.

On the other hand, solar power plants promise to generate power during the dry season.

Myanmar’s master energy plan, announced in 2015, envisions a scenario for 2030 in which 57% of its electricity comes from hydropower, 30% from coal, 8% from natural gas and 5% from renewables like solar and wind.

“There is no reason Myanmar cannot achieve the ambitious renewables target,” said Tim Dobermann, who has worked with the Ministry of Electricity and Energy and is currently a researcher at the London School of Economics. “In Southeast Asia, a standard utility-scale solar plant should be able to produce between $80 to $100 per MWh, which is significantly lower than other alternatives. Furthermore, solar farms can start supplying electricity on a much shorter timeline.”

The Ministry of Electricity and Energy is also pushing natural gas-fueled power plants. In July, it issued a notice to proceed to a consortium led by Japanese trading house Marubeni to develop a 1,250MW plant.

Prolonged negotiations, however, have prevented final agreements from being reached on any of these projects.

While there has been considerable private sector interest, questions remain on how actual investments can materialize. Scaling up generation capacity remains a key challenge.